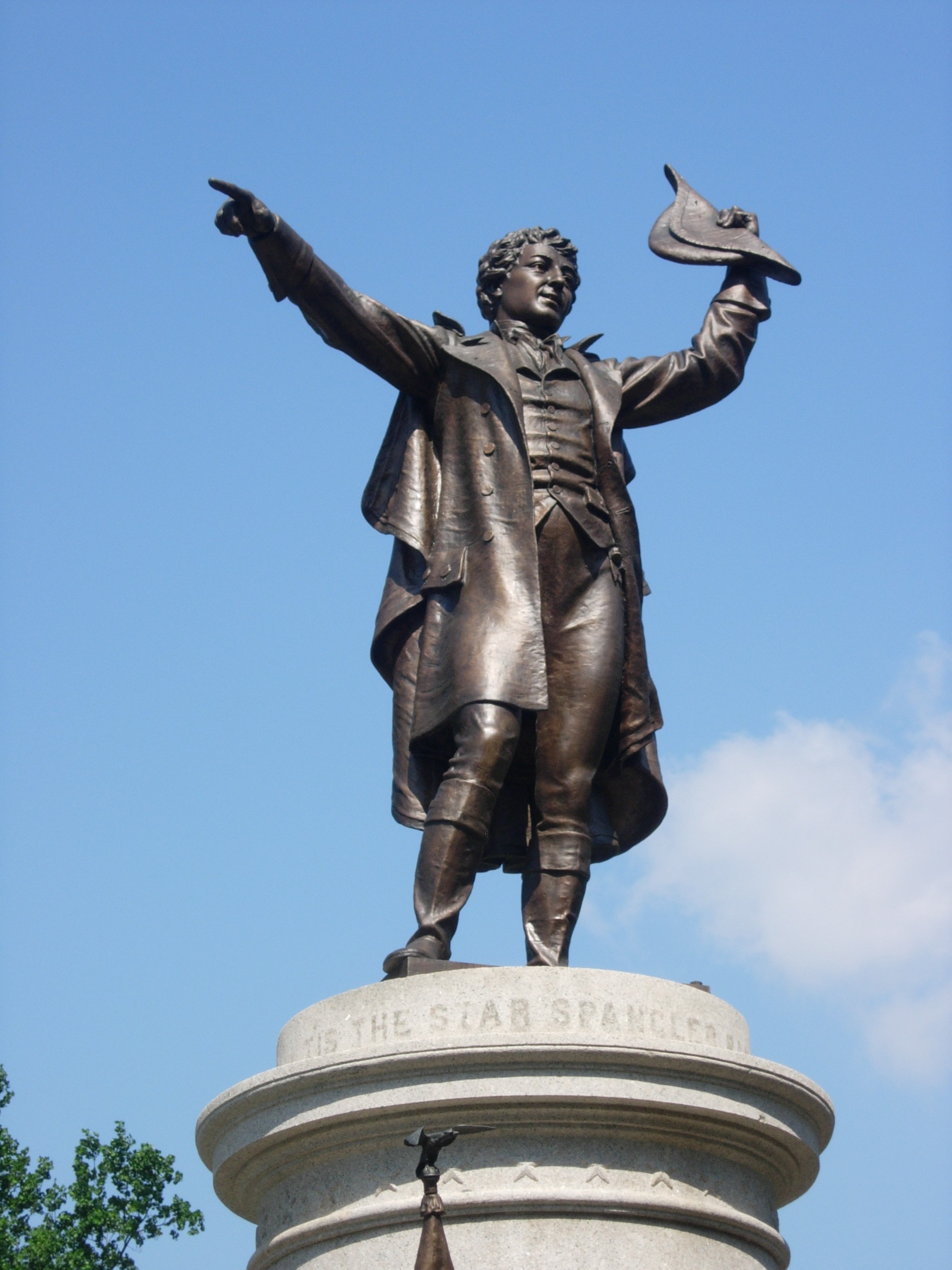 Summary:
Anthem & Author Reunited (June 14-15, 2013) - Francis Scott Key’s original “Star-Spangled Banner” manuscript, on loan from the Maryland Historical Society, will be on public exhibit in Frederick, Maryland on June 14 – 15, 2013. In a procession and ceremony including The U.S. Army Old Guard, the document will be brought to Key’s gravesite in Mount Olivet Cemetery on Saturday, June 15, 2013. The song lyrics have not been in proximity to Key since he handed them to a relative in September 1814.

Social Media:
Connect with Visit Frederick and use hashtag #FSKFrederick for this event

Frederick, MD – In anticipation of next year’s 200th anniversary of the September 1814 writing of the “Star-Spangled Banner” by Frederick County, Maryland native Francis Scott Key, the original “Star-Spangled Banner” song lyric manuscript will be on public display in Frederick, Maryland on June 14-15, 2013 during a 2-day event, “Anthem & Author Reunited.” On loan from its permanent home at the Maryland Historical Society (MdHS) in Baltimore, the document will be brought to Key’s gravesite in Mount Olivet Cemetery on Saturday, June 15, 2013 for a ceremony and interpretive marker unveiling.

“A highlight of the event for many will be the moment that the manuscript is back with its author as it arrives at Key's monument and grave on its return trip to Baltimore on June 15,” said John Fieseler, Executive Director of the Tourism Council of Frederick County. Francis Scott Key wrote the famous song in Baltimore after he witnessed the bombardment of Fort McHenry on September 13-14, 1814. For the first time since Francis Scott Key handed the song lyrics to his brother-in-law in 1814, the manuscript will be back with its author.

The “Star-Spangled Banner” will arrive at Mount Olivet Cemetery on June 15, 2013 at 3 p.m. escorted by The U.S. Army Old Guard and horse-mounted units from the National Capital Park Police – Montgomery County. Units with The U.S. Army Old Guard include the Commander-in-Chief's Guard, Old Guard Fife and Drum Corps, Continental Color Guard, and Honor Guard.  An estimated 100+ soldiers will be a part of the ceremony. The ceremony at Mount Olivet also includes professional opera singer and Frederick native Tracie Luck and the Fort McHenry Guard Fife and Drum Corps. New interpretive markers that focus on Key's connections to Frederick, the writing of the “Star-Spangled Banner,” and the story of the monument will also be unveiled. The manuscript will then be returned to its permanent home at the Maryland Historical Society in Baltimore.

“Three key elements came together on that fateful day in September of 1814…the fort under bombardment, the flag, and the eyewitness who would pen our future National Anthem,” said Maryland Historical Society president Burton Kummerow.  “Today, Baltimore, Washington and Frederick hold these pieces of the story, with Fort McHenry and the manuscript in Baltimore, the flag at the Smithsonian in Washington, and the author’s grave and monument in Frederick.  During this bicentennial of the War of 1812, we are pleased to be able to temporarily display the document at the other points on that triangle.”

The public viewing of the “Star-Spangled Banner” manuscript will be at Frederick City Hall, 101 N. Court St., Frederick, Maryland, on Flag Day, Friday, June 14 from 2:30 p.m. to 5:30 p.m. and on Saturday, June 15 from 9 a.m. to 2 p.m. In addition, War of 1812 artifacts from the private collection of the James Kochan Fine Art & Antiques gallery will be on display at Frederick City Hall. Interpretive marker unveilings will occur throughout the two-day event at Courthouse Square, Harry Grove Stadium, Historic Frederick (Hessian) Barracks, and Mount Olivet Cemetery.

“This is one of many collaborative efforts across our state during this three-year commemoration of the bicentennial of the ‘Star-Spangled Banner,’” said Bill Pencek, Executive Director of the Maryland War of 1812 Bicentennial Commission. “It’s an opportunity to showcase Maryland’s extraordinary contributions to the nation during the War of 1812.”

In addition to the interpretive marker unveilings, an exhibit featuring a fragment of one of the British bombs that “burst in air” over Fort McHenry in 1814 will be unveiled at the Frederick Visitor Center, 151 S. East St., Frederick, MD at 10 a.m. on Saturday, June 15.

For a detailed schedule of events, visit www.bit.ly/StarSpangledBannerFrederick2013 or for event information for visitors, call 1-800-999-3613.

Frederick and the Key Connection
Frederick's Mount Olivet Cemetery is the final resting place of “Star-Spangled Banner” author Francis Scott Key, below an impressive monument to him. Key was aboard a ship near Baltimore Harbor during the bombardment of Fort McHenry on Sept. 13-14, 1814 and wrote the famous song in Baltimore. He was born in 1779 at Terra Rubra in the part of Frederick County that later became part of Carroll County, and he began his law career in Frederick in the early 1800s. Key was originally buried in Baltimore, Maryland in 1843, but was reinterred at Mount Olivet Cemetery by his family in 1866 to honor his desire to be laid to rest in Frederick.

About the Project
“Anthem & Author Reunited” is sponsored by the Tourism Council of Frederick County in partnership with the Maryland Historical Society and the Francis Scott Key Memorial Foundation, with special thanks to Star-Spangled 200, James Kochan Fine Art & Antiques, the City of Frederick, Mount Olivet Cemetery, Maryland School for the Deaf, and the Frederick Keys.

For more information about other things to see and do in Frederick County, Maryland and to plan your visit: www.visitfrederick.org.

About Star-Spangled 200
Star-Spangled 200, a national bicentennial in Maryland, commemorates the writing of the “Star-Spangled Banner” and the War of 1812. Star-Spangled Sailabration in Baltimore’s Inner Harbor and the Chesapeake Bay launched the three year commemoration in June 2012. Sailabration included a maritime festival with 45 vessels from a dozen nations and an airshow featuring the Blue Angels, and drew more than 1.5 million visitors. Star-Spangled 200 continues Spring 2013 through Summer 2014 with the Chesapeake Campaign, a series of more than a dozen festivals in waterfront communities around the Bay, and Star-Spangled Spectacular, September 6-16, 2014, celebrating the improbable victory at Baltimore that helped save the nation and inspire our national anthem.  For more information, please visit www.StarSpangled200.com or www.StarSpangled200.org.